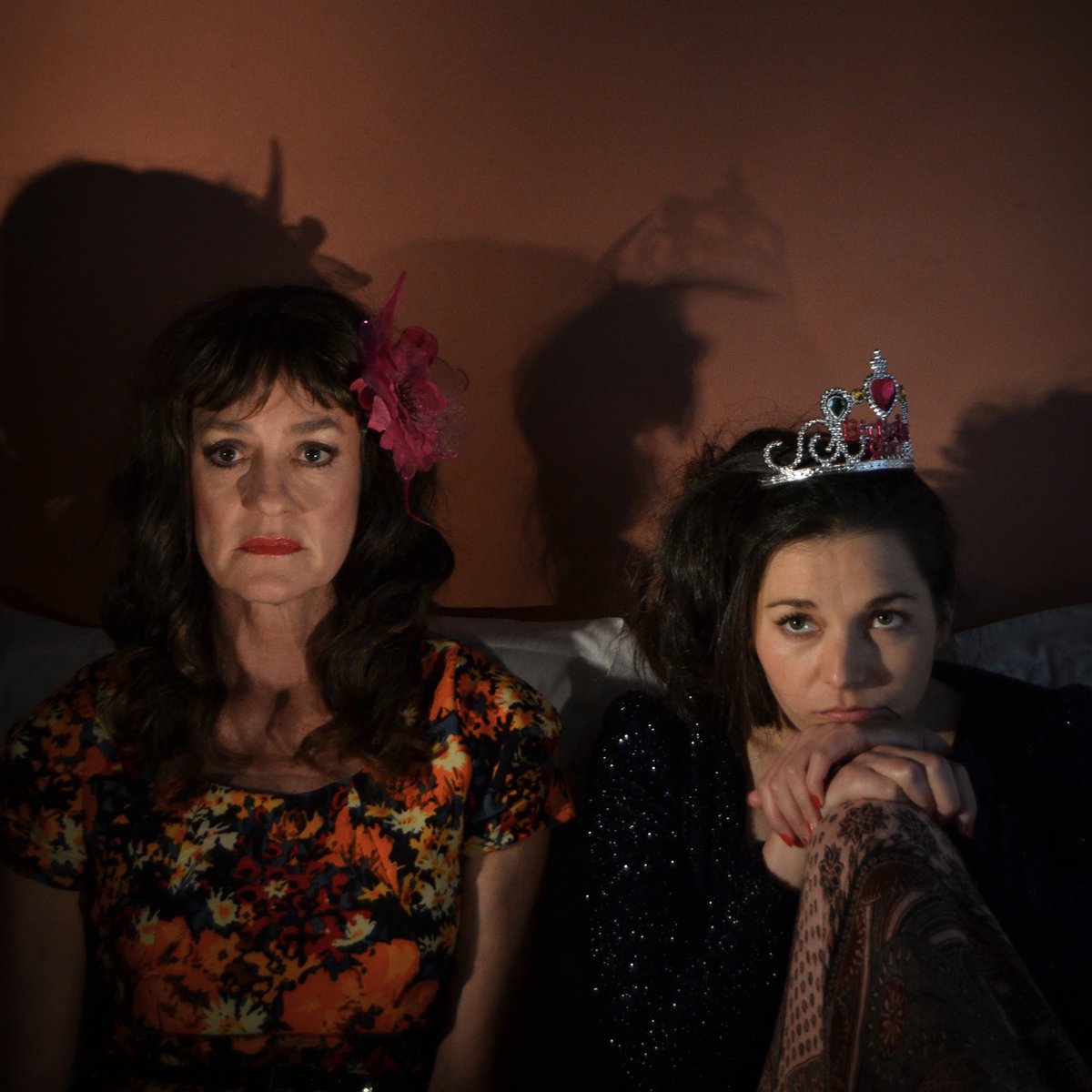 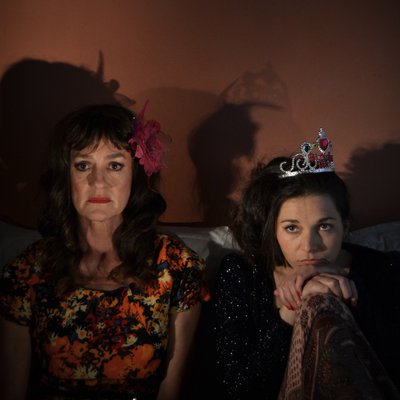 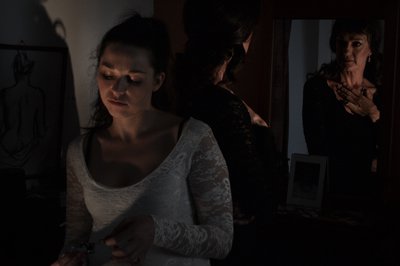 WHITE ELEPHANT is a study of contemporary South African malaise, framed by the story of Issy and Ma: a mother and daughter who each seek, in their own peculiar way, to do the impossible and kindle a future from the dying embers of their past.
WHITE ELEPHANT is a debut play-text by novelist David Cornwell, directed by the award-winning Philip Rademeyer, and starring Fleur Du Cap-nominated Bo Petersen and Naledi-nominated Danieyella Rodin. It tells the funny, shocking story of a troubled mother/daughter relationship—two women frustrated by great expectations, and by memories of a life that is beyond their present means. When Issy arrives at her family flat in the dead of night, having run away from her abusive husband, she expects to return to the benefits of home: familiar objects, love and support for her fledgling business enterprise. However, it immediately becomes clear to her that things have changed—the house is nearly empty, and Ma is in a strange mood. The old fault lines in their relationship quickly reopen and, fueled by a night of excess, the two are forced, finally, to confront the reality of their family’s situation. WHITE ELEPHANT, an urban South African gothic tale told by an award-winning team, is a critical examination of entitlement, a study of decaying decadence and the lengths people will go to protect the last vestiges of their status.
Philip Rademeyer is a writer, director and co-founder of the award-winning theatre collective, Rust Co-Operative. His work, known for its engagement with social and political issues, has won international and local awards and nominations, most notably at the International Dublin Gay Theatre Festival, the National Arts Festival, Amsterdam Fringe Festival, Clover Aardklop Festival, and the Fleur du Caps. His work has shown at the Artscape and Market Theatres, and at various festivals and independent venues across South Africa. The View and Siembamba showed in Dublin and Amsterdam respectively, while The View and Ashes were published by Junkets Publishers. Most recently, The Graveyard received a Standard Bank Silver Ovation Award at NAF, and he was an ImpACT Award Finalist for Theatre in 2016.
David Cornwell lives in Salt River and writes fiction, films and songs for the rock band KRAAL. His debut novel Like It Matters was published by Umuzi in April 2016 to wide critical acclaim. WHITE ELEPHANT is his first play.
Danieyella Rodin has been acting professionally since the beginning of 2011. She studied her undergraduate degree in performance at Rhodes and then her Honours at UCT in 2010. She has performed with The Mechanicals (A Mid-Summer Night's Dream directed by Guy De Lancey) and in The Chaeli Campaign’s, In The Wings alongside Bo Peterson, which earned her a Naledi Award nomination for best new comer in 2012. She played Anne in The Treatment directed by Thenjiwe Stemela in December 2013. In addition she has been seen in work by the Rust Co-Operative, Louis Viljoen, and most recently, in Jack Hardcastle’s prodction of Dirty Words at the Kalk Bay Theatre. When she is not on stage saying words, she sings them, as the frontwoman of Cape Town rock band KRAAL.
Bo Petersen has been involved in the performing arts for over 38 years. She was fortunate to have Barney Simon, the late artistic director of The Market Theatre, as one of her mentors. As a result, her interest in developing South African theatre and talent remains a passion. Bo has been part of the cast of “In the Wings” for the past 3 years is very excited to be part of this new production. She is best known as an actor, on stage, TV and film but has developed a real love for directing. She began this journey 15years ago with multi-talented Graham Weir and has directed 3 of his award winning plays. Since 2007 she has worked together and developed the talent and skills of Zimbabwean Jonathan Nkala. She edited, directed and produced his trilogy of plays “COCKROACH” and travelled with these productions to festivals both nationally and internationally. In 2011 she was nominated as Best New Director for the Fleur du Cap Awards for “BLACKBIRD” a project which was produced by her and the cast. Warrick Grier won Best Actor for his role in “BLACKBIRD”. 2012 was a bumper year for Bo as an actor. Her performance in Athol Fugard’s “STATEMENTS” earned her a Fleur du Cap nomination for Best Actress. The production was chosen to be part of the South African Season in Edinburgh. In 2014 Bo was in the Tony Awad winning play “Vanya and Sonia and Masha and Spike” which received critical acclaim. She has established an auxiliary career as a dialogue and drama coach for the film and advertising industry. Her film and TV credits include amongst others “THE GIRL” and “SAFE HOUSE”. In 2013 and 2014 she was the dialogue coach for Season 1 and 2 of “BLACK SAILS” the biggest TV series to be filmed in South Africa. Most recently, she has directed Graham Weir in the award-winning "DEAD YELLOW SANDS" and starred in the Silver Ovation award-winning "THE GRAVEYARD" (also directed by Philip Rademeyer).

Great show, great venue..we'll be back for more.

Brilliant acting but I bit intense for me. Like a punch in the stomach. It made me feel uncomfortable but that's not necessarily a bad thing.

No, no, no! - amateurish script, acting and production. So disappointed, not the usual standard. Sorry!

The performances were great, particularly Bo Petersen's Mum going off the rails! But I thought the play was rather derivative of Hello and Goodbye - right from early on I kept on being reminded of the Fugard play. A sort of H&G on steroids.

Powerful performance by both actresses. The elephant in the performance (the question about the father) was always in the back of my mind throughout. The addicted personality behaviors were excellently carried out and led to a feeling of no good outcome for either character. Tragic.

I found The White Elephant a harrowing, true to life performance. One's attention was engaged throughout.

Enjoyed it. It starts agonisingly slowly, but builds to a dramatic climax. I brought a group of 8 friends, male and female, who all liked it too, especially the ladies withdaughters.

A compact drama giving a lot of food for pondering. Great actors. Thank you again for a good show.

Absolutely excellent. Not an easy watch, but both actors were superb and incredibly talented. Watched it with my mom and we were both riveted. Thanks for yet another excellent show.

Brilliant - I could feel every emotion, to the point where I at some times found myself feeling like I'm in the room with someone I know going through this, and I want to stop them. Excellent writing, excellent acting.

It was excellently acted, but very dark and tragic.

Great dialogue and riveting interplay between the two characters.

The performances were great, particularly Bo Petersen's Mum going off the rails! But I thought the play was rather derivative of Hello and Goodbye - right from early on I kept on being reminded of the Fugard play. A sort of H&G on steroids.

Exceptional performance! Actors had me fully immersed in their world.

Superbly acted by both, tightly written, it held ones attention. I've seen Bo many times. As always she was brilIiant. I hadn't seen the other actor, but she was really promising. It was so harrowing, but the humour helped lift the mood. There was no light at the end of the tunnel, so one left the theatre feeling a bit battered. The set and lighting were good.

5 Star performances of a toxic, co-dependent mother and daughter relationship! Great viewing but the elephant in the room is unredeemingly dark rather than white. @mapmyway