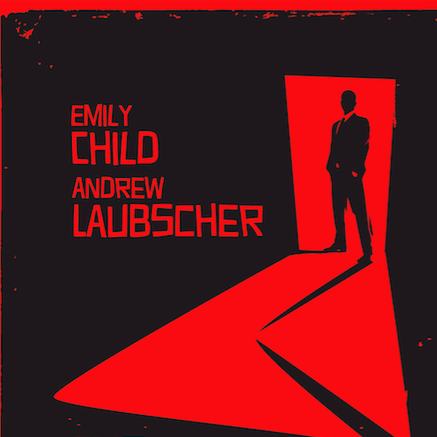 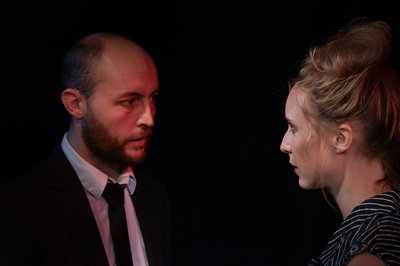 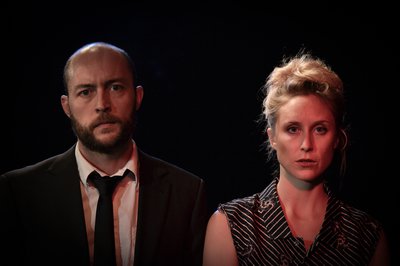 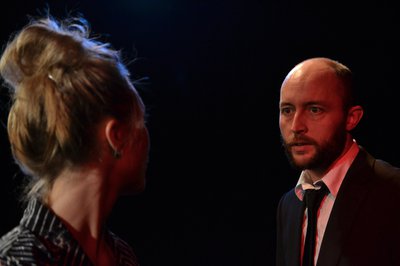 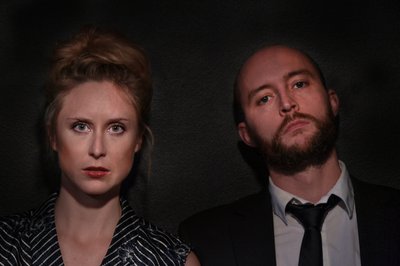 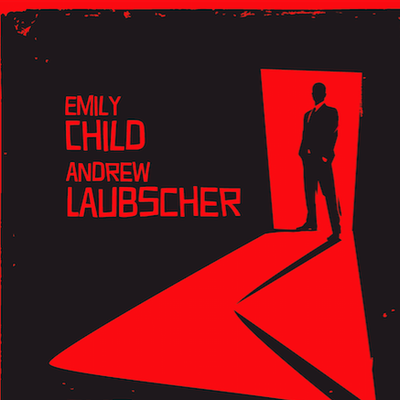 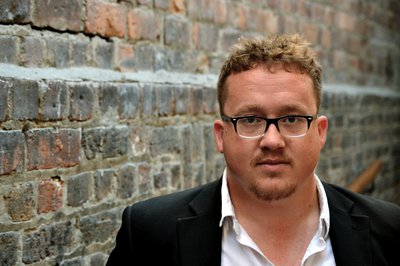 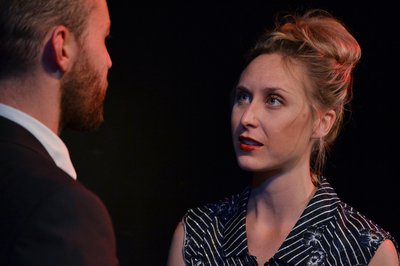 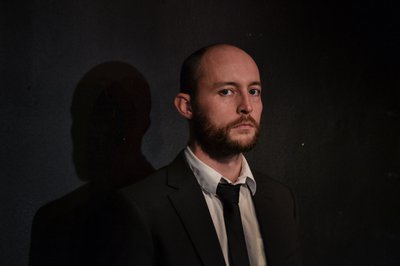 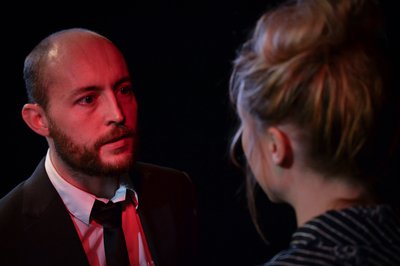 The Emissary is a dark study of a friendship rooted in a lie. Written and directed by Louis Viljoen (The Pervert Laura, The Kingmakers) and starring award winning actors Emily Child and Andrew Laubscher. While waiting for her long-term boyfriend to return from an extended stay overseas, Delia agrees to meet Douglas, her boyfriend’s best friend, in order to discuss the tensions that have been brewing between them since the beginning of their relationship. But one of them is hiding something terrible and this is the night when old wounds resurface and secrets are unearthed. What follows is an unnerving examination of two troubled people who think they know each other, but have no idea what awful things can lurk in the soul.
Louis Viljoen is a Cape Town based playwright and director. He has written and produced numerous plays including, The Bile Boys, The Frontiersmen, The Verbalists, Champ, Porno 88, The Kingmakers and The Pervert Laura. He is one of the creators (along with playwrights Nicholas Spagnoletti and Jon Keevy) of the successful short-play initiative “Anthology” which has had three successful seasons at The Alexander Bar’s Upstairs Theatre. Viljoen has won Fleur Du Cap Theatre awards (Best New South African Script) for Champ (2013) and The Kingmakers (2015). He was the recipient of the Rosalie van Der Gucht Best New Director award for his plays, The Kingmakers and The Pervert Laura. Viljoen is currently the Writer In Residence for The Fugard Theatre.
Emily Child
Emily graduated from the University of Cape Town in 2007 with a Theatre and Performance Degree, specializing in Acting. Since then she has worked independently and as a proud member of acclaimed Cape Town based theatre troupe – The Mechanicals. Her work has garnered her numerous awards and nominations including the 2015 Fleur Du Cap for Best Actress for the role of “Laura” in Louis Viljoen’s The Pervert Laura last staged at the The Fugard Theatre. Other theatre projects include Lear, written by William Shakespeare and directed by Guy De Lancey, Champ, written by Louis Viljoen and directed by Greg Karvellas, which travelled to the Edinburgh Festival in 2013, as well as LA based Zombie Joe’s Underground Theatre and The Mechanicals’ co-production Urban Death, directed by Jana Wimer. Emily’s one -woman show, based on Dorothy Parker’s short stories, A Certain Lady was directed by Greg Karvellas and performed around Cape Town in 2014. Emily was recently seen at The Baxter Studio Theatre, Grahamstown and Hilton Festivals in Born in the RSA, directed by Thoko Ntshinga as well as Mike Bartlett’s Contractions, at The Alexander Bar’s Upstairs Theatre, directed by Greg Karvellas in February 2016. On camera, Emily’s projects include the SAFTA winning series pilot, Armed Response, BBC’s youth series Young Leonardo as well as the feature films Shirley Adams, directed by Oliver Hermanus and Beyond the River, directed by Craig Freimond, to be released in early 2017.
Andrew Laubscher
Andrew Laubscher is a Cape Town-based film and theatre actor. Some theatre highlights include Mirror Mirror directed by Geoffrey Hyland and written by Mike van Graan; As You Like It directed by Geoffrey Hyland; Cosi directed by Scott Sparrow; Antony and Cleopatra directed by Marthinus Basson; A Midsummer Night’s Dream directed by Guy de Lancey; Lovborg\'s Women directed by Chris Weare (Fleur Du Cap nomination for Best Supporting Actor); Mafeking Road directed by Tara Notcutt; A Comedy Of Errors directed by Matthew Wild; and Balbesit directed by Jaco Bouwer. In 2014, Andrew won the Fleur de Cap Award for Best Supporting Actor in a Musical for his performance as Riff-Raff in The Rocky Horror Show. Andrew\'s most recent work include Anthology: Anti-Matter directed by Louis Viljoen and the South African feature film Modder en Bloed.

Review of The Emissary by Annzra Denita

Interview with Emily Child for The Emissary

Punchty script delvered well by the two performers. A litte to much profanity and I'm no prude. It was ten minutes shorter than advertised.

Louie at his best and of course my favourite 2 actors. Need I say more?

Like a bull terrier; short, viscous and it won't let go.

Very smart but also very irritating because it was difficult to empathise with either character.

Incredibly powerful performance. Got under my skin. The acting was hauntingly good. The writing totally potent and incisive. Loved it.

wow i sat on the edge of my seat .. completely emersed by the onslaught of games played out .. wicked cruel stuff ... adored it .. Louis's writing has reached a new level and no longer mere intellectual acrobatics but allowed me to become emotionally charged ... viva!!

It was gripping, with a much needed splash of humour now and then. Very enjoyable!

Absolutely brilliant! Wow, what great scriptwriting. Stellar performances from each actor. A powerful and gripping play. Liked the 45 minute length Want to see more by the same author.

Do we go back next week for Act Two?

Good acting but I found the script a bit too crass for what it was and there wasn't anything to take away from it. I thought The Pervert Laura was far better.

Great performances. The actors were fully "in" their roles. However I felt the show was a bit short... Not that I could imagine it going on much longer. So all in all a little conflicted about the show. Would I recommend the show to my friends, probably not. Not that I would dissuade them from seeing it. I will keep an eye out for other shows and definitely come experience the venue again.

An amazing show - was captivated from start to finish by two very talented actors.

it was interesting and at times strangely funny...

5-star script, performed with their usual panache by Andrew and Emily, who are a blessing to all theatre-goers. Bring the show back, soon. I’ll be there, and so will more of my friends who missed it.

Louis Viljoen never fails to impress with the insightful themes and situations he creates for his wonderful actors to explore and express via masterfully-crafted dialogue, and The Emissary is no exception: I was completely entertained and riveted throughout the play.

I went to see "The Emissary״ at Alexander Upstairs. This kick-in-the-gut play (powerfully written and directed by Louis Viljoen) is a dark (very dark) encounter between two people, a woman (Emily Child) and her boyfriend's best friend (Andrew Laubscher), both simply superb here. It's the best study of evil I'd seen in a long time. It's short and bitter, don't miss it.

Excellent performances and gripping play .Thanks

I found the dialogue snappy. I was concerned when reading the blurb that the darkness would be one character being secretly in love with the other... I was glad that the play did not succumb to predictability.

Wonderful play and performance. Great value for money thanks.

Spellbinding drama. The male actor spoke a little too softly at times (back to the audience?). Loved it; it provided many talking-points for later...!

Excellent performances and gripping play .Thanks

The rape-fantasy narrative really put me off.

Not sure if I'm allowed to swear? What a mind fuck. Saw Emily Child in The Pervert Laura and Born in the RSA last year so was keen to see this, and see doesn't disappoint. A great actress. I don't know the male lead's name but he was as good. Excellent acting. Very quick, intense, riveting and explicit dialogue. Would definitely recommend it to anyone who's not a prude.

the writing was excellent and the performers good

Wonderful play and performance. Great value for money thanks.

A very interesting play that needed a lot of concentration,but was gripping in its wordiness

Excellent. Two criticisms both regarding direction: If the male character had come across as more seductive in his manipulation his hold on the woman would have been more convincing. And the pace of both characters was too similar.

It was very good. The dialogue is rapid, I sat right at the back and sometimes missed some of the exchange when the actor's back was turned away from the audience. Very clever and gripping script. Actors excellent.