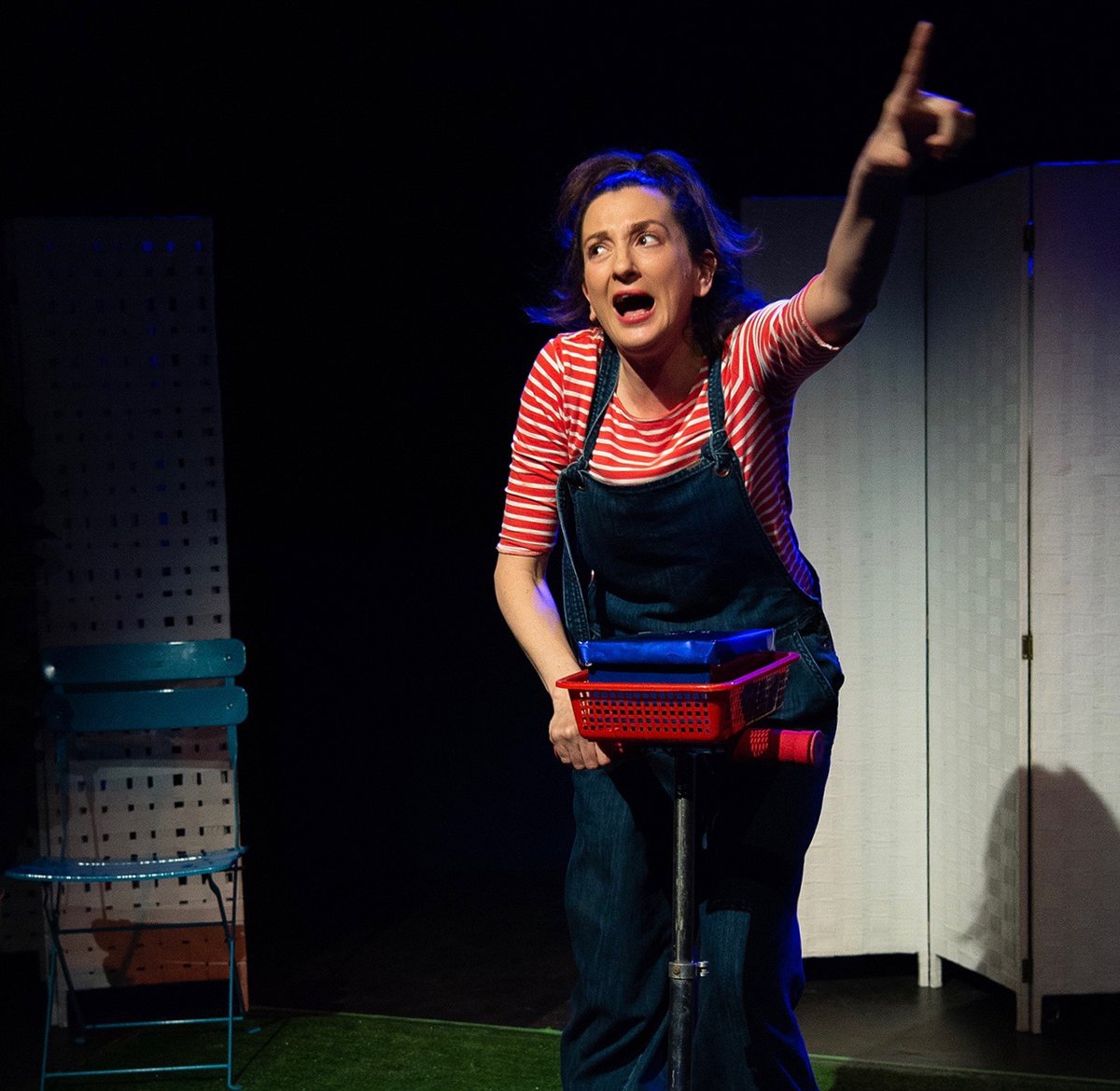 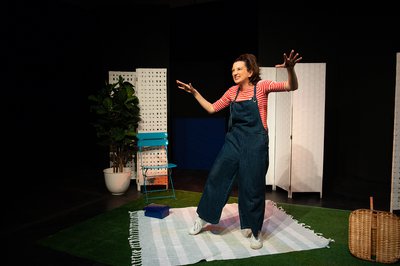 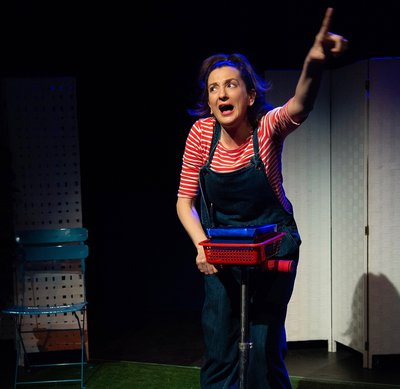 Winner of a 2018 Standard Bank Ovation Award, Contagious Theatre’s newest production, Silkworm, is an evocative exploration of the ordinary things that make life extraordinary. The story is told to us through the eyes of the at once gregarious and socially awkward Georgina. Georgina is about to have the single most important day of her life. On this day, she takes the audience on a journey that reveals how the small things are, ultimately, big things.

Silkworm makes extensive use of storytelling and clowning techniques borrowed from Italy’s Helikos School of Theatre Creation, adding a dollop of humour and a touch of whimsy. The result is a theatrical experience that explores, pushes, and ultimately punctures the gossamer thin veil that divides the wistfully surreal from the frighteningly real.

Silkworm is conceived and directed by Jenine Collocott and stars Taryn Bennett, with additional dramaturgy by Nick Warren. Audiences can anticipate the sensitive and insightful entertainment delivered by other Contagious Theatre productions and collaborations, including The Snow Goose, The Old Man and The Sea, Babbelagtig, Kaput, Dirt, Sunday Morning and Making Mandela.

‘Superbly brought to life.’
- The Critter

‘A shining beautiful gem.’
- The Witness

'Bennett is a delight to watch.'
- Robyn Sassen

Jenine studied theatre creation at Helikos in Florence, Italy. Her production Making Mandela won the 2016 Naledi for Best Youth Production and was most recently selected as part of the Assitej World Congress Main Programme. Much of her work has travelled internationally, namely Dirt (Official selection Fringe World, Perth and the Brighton Festival); Sunday Morning (Official selection Edinburgh Festival); A Day in the Desert (Sold out tour in California).
Jenine is an acclaimed director and designer and has been nominated for a number of awards. Her most recent work Silkworm won a 2018 Ovation Award and The Old Man and the Sea was nominated for two Naledi Awards and have played to critical and audience acclaim. Her most recent production Babbelagtig won Best Youth Production and Best Debut at the KKNK Kanna Awards and has been nominated for Best Production at the 2019 Fiestas.
Instagram @jeninecollocottwarren
Twitter @jeninecollocott
Taryn studied theatre at Rhodes University. She has performed for TV and stage and is a regular at the National Arts Festival with hits like The Snow Goose, Doctor Colliinger’s Funeral Service, Kaput and Sie Weiss Alles. Taryn performed nationally for both Ubom and FTH:K theatre companies to critical and audience acclaim. In 2015 she worked on twenty-six episodes of the children’s TV series Silly Seasons. Taryn was most recently nominated for Best Supporting Actress for The Old Man and the Sea at the 2018 Naledi Theatre Awards. Her critically acclaimed Silkworm won a 2018 Ovation Award.
Instagram @tarynsandrabennett

Tarryn is always a joy to watch. She has created a great clown persona and I loved being whisked away into her world. She interacts with the audience with a truth she has discovered in her clown and this makes these interactions joyful to co-participate in. The ending did not resonate with me, I wanted to feel the sadness not just understand the sadness intellectually. Why does this happen? I believe she loses her clown. She as an actress comes through, I wonder if the sadness wouldn't resonate stronger if she stayed in her clown. Ask her clown how she wants to react in this situation? The idea is right, to bring weight to the piece through death ... That said, well done, I will definitely recommend it to other people.

An interesting production. Taryn was delightful and charming

Taryn Bennett is utterly fabulous, enchanting and delightful. What a perfect way to end Election Day, laughing and focused on real make-believe that was more credible than most politicians’ promises. I rate this as a definite must see. Tell your friends. Tell everyone.

Enjoyable but didn't quite live up to the review

Was so excited to be able to see the show - had booked for it in Grahamstown last year, but due to power cuts, my show was cancelled. Loved the show - she is so talented and has such an expressive face. Recently saw her in Snow Goose at the Fugard.

I sent guests - they were not sure what they were expecting and were pleasantly surprised. I had seen in at NAF last year and really loved it!

We experienced very strange reactions: we moved from initially feeling uneasy and embarrassed (at the weak "plot", and almost amateurish attempts at humour and unsuccessful attempts to "engage" the audience) to eventually thoroughly enjoying the quirky, engaging personalities of the actress. The material she gave herself to work with remains "weak"; but we would dearly love to see/hear her again in something much more substantial. [P.S. did we detect the influence of Rowan Atkinson in her voice manipulations and facial contortions? That is not a complaint - she used them to fine effect.] We think she actually has great stage presence and an irrepressible personality... Please ditch the box of silkworms - and find some challenging (and humorous) material for next time... [Please share these comments with the actress, if deemed appropriate.]

Brilliant performance. Enjoyed the theme and development of the plot immensely!

The show was a little awkward in the beginning but before long it drew us in completely. We felt all of her emotions deeply and we felt that the improvisation was cleverly done. It can't be easy to entertain such an intimate crowd but the actress managed the task admirably.

Actually I'd rate 7 out of 5 but then I'm the producer so you should probably ignore my rating as biased in favour of !!!!!

Absolutely loved it. Found it quite triggering. I wept. Brilliant Taryn Bennett.

In its very early infancy - needs a lot of refining and development. Didn't enjoy her babyish voice. Loved the idea at the end, of the transitioning into the moth. The mask was beautiful.

was very funny and entertaining

Enjoyed the show; was very creative and interaction with the audience and the use of the set was fun.

Mostly whimsical with a dash of the real.

Highly Entertaining, nicely composed and set - for this and for deeper impact. Well performed and well worth the outing, congrats and thank you

Silkworm was potentially a very good show. Taryn is quirky and talented. A bit Amelie like. I am not good with audience participation, in fact I dislike it intensely. Was happy we were not ‘picked’ on. Overall somebody to watch as is the director and writer. I don’t want to rate the show. I am an actress. And I dislike being rated. Ranking. No.

In its very early infancy - needs a lot of refining and development. Didn't enjoy her babyish voice. Loved the idea at the end, of the transitioning into the moth. The mask was beautiful.