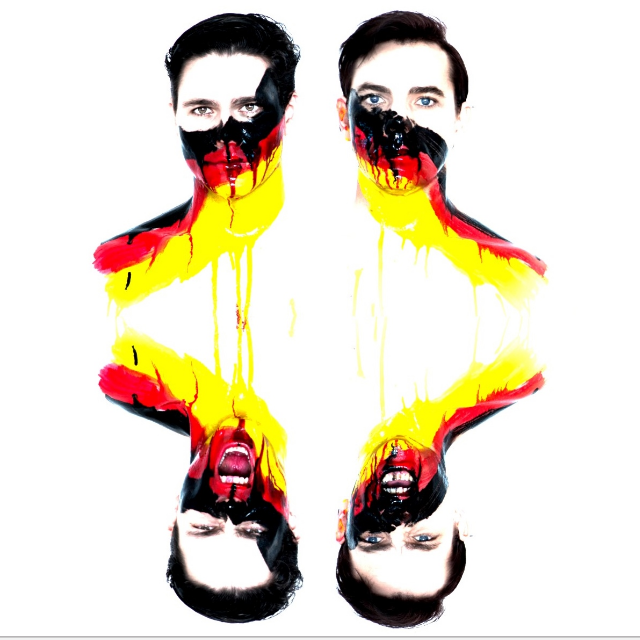 12 performances between Nov. 7, 2016 and Nov. 25, 2016
Drama
Written by Mark Ravenhill • Directed & Designed by Fred Abrahamse • Presented by Abrahamse & Meyer Productions • Performed by Marcel Meyer and Francis Chouler
80mins
“I found you. You’re here. And I was over there. But now I’m over here. I’m here. You are my brother. I love you.” When Franz’s mother escaped to the West Berlin with one of her identical twin boys, she left the other behind. Now, 25 years later, Karl crosses the border in search of his other half. As history takes an unexpected turn, the brothers must struggle to reconnect. Mark Ravenhill’s visceral new play examines the hungers released when two countries, separated by a common language, meet again.
“Savage and hilarious; ¬anyone who questions modern theatre needs to see this show.” – The London Paper
ABOUT ABRAHAMSE & MEYER PRODUCTIONS:
Founded in 2006, Abrahamse & Meyer Productions has gained a reputation as South Africa’s leading independent classical theatre company. Productions include the South African première of Stephen Sondheim’s Assassins, Tennessee Williams’ Kingdom of Earth, The Milk Train Doesn’t Stop Here Anymore, The Day on Which a Man Dies, Stairs to the Roof, The Hotel Plays and One Arm; William Shakespeare’s Hamlet, The Tragedy of Richard III, A Midsummer Night’s Dream and Othello as well as the South African première of Joe Calarco’s Shakespeare’s R&J; Sir Noël Coward’s Private Lives, Yukio Mishima’s The Lady Aoi and Eugene O’Neill’s Desire Under the Elms. The company regularly appears on stages across Europe, the United States and South Africa. In the past decade the company has been nominated for and won over 30 national and international theatre awards.

Superb theatre: exceptional script, performances (Marcel Meyer and Francis Chouler), design (set, costumes, sound), lighting. Mark Ravenhill's play is hyper pertinent in the wake of the current economic global crunch and despair - with Pres Elect Trump, refugee crisis, fear, and despondency. Ideology of what and belief in what? Is it better or worse "over there" and what does that say where we are now.? This is a knock out production - brilliantly directed by Fred Abrahamse with an acute precision of placing of props and the protagonists in the space. In my opinion this is one of the top five productions of the year. Needs to be seen twice- to grasp all the nuances. It is thrilling to watch - from the visual gags (which provide comic relief and release) to the synergy between the performers. This is a beyond wow production.

The text was good except the macabre episode towards the End. The actors did a good job. Thank you.

Thought the acting was first rate and the first two thirds of the play like wise. Felt it should have ended earlier than it did, when it went into the eating of the finger etc it lost me. That is no reflection on the actors, though rather the play itself!

Funny but it could have been better if e.g the story was connected to current events some how. I got a little bit annoyed on the westie guys acting and boyish manners but the eastie guys acting was great. The story lacked depth even thou it clearly wanted to talk about deep subjects.

I loved the play - excellent performances from both actors and wonderfully creative use of set and stage. Thank you!

Extremely well cast and directed, synchronising their twin behaviours showing extreme empathy and antipathy, in the context of those competing world views.

Loved the design and whole style of production. Both actors at their best. Ravenhill's clever play intrigues and challenges, with interesting US bookends (especially as we awaken to Donald trumping Hillary). As the programme note says, much resonance here in SA (language, colonisation, etc). While it's great we encourage our local playwrights (as in The Heroin Diaries), it's essential that audiences are given the chance to see quality drama from UK, USA and other countries, especially when we can relate to the subject matter.

This is Charles. Being one of an identical twin married to a half German wife, and having been to Berlin in 1979, plus having my own son Francis in the cast, created a riveting and emotional journey. It cuts deep into the human psyche, even if metaphorical, and needs debriefing and discussion with those similarly touched. Excellent theatre which will stay with me, especially near the end where the tender touch of the dying Karl yet loved his brother, despite being "hated", much like Cain and Abel, with his soul continuing to live beyond death.

What a delight. Fresh, intense and a wake up call on human emotions. A reminder theres always another side. The weird English the one actor spoke was hysterical......we cried with laughter for minutes before we got pulled back into the seriousness of the show. Highly recommended.

We were moved and inspired by the performance of the actors,the stage props and use of space during Over There. Its a harrowing piece and thought provoking. In some ways it mirrors the social, psychological and material divides in contemporary South Africa. Three and a half out of five is our rating. Of course Alexander Bar is a great venue. I have attended shows at the venue several times and will be back. Kris (and Maura)

Intriguing play (as one would expect from Mark Ravenhill), with lots of resonances for right-now! Very stylishly presented (as one has come to expect from A&M). Two first-class actors and a past-master director, so it has to be good. I didn't like the underpants: tight-fitting briefs would have been (oddly) less distracting. Ravenhill focuses on the *political* differences, obviously, and so I don't know how deep I got into the *personalities* of the twins. A thoroughly good evening!

I loved the play - excellent performances from both actors and wonderfully creative use of set and stage. Thank you!

What a delight. Fresh, intense and a wake up call on human emotions. A reminder theres always another side. The weird English the one actor spoke was hysterical......we cried with laughter for minutes before we got pulled back into the seriousness of the show. Highly recommended.

Excellent performances and clever production design. Well done to the sound designer too!

Would be great if you can just give a heads up on the play containing strong language.