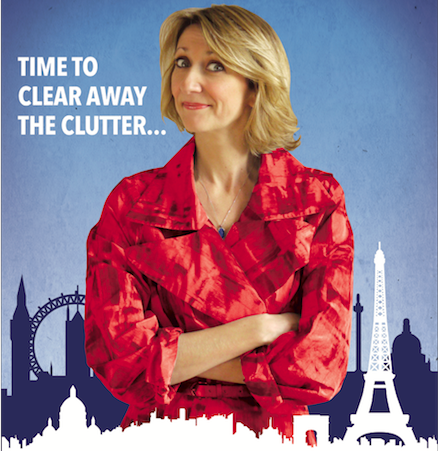 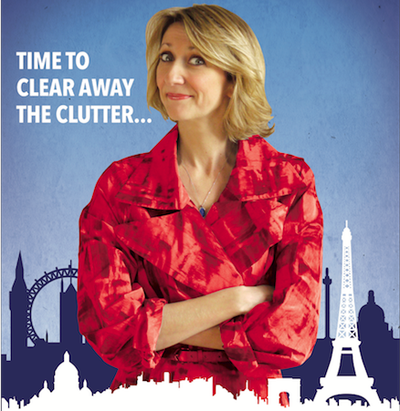 3 performances between March 16, 2017 and March 18, 2017
Musical Theatre
Written and performed by Sarah Tullamore • Original music and lyrics by James Burn • Directed by Frédéric Baptiste • Accompanied on the piano by John Florencio
80mins

She's jived in Japan, indulged in Italy, feasted in France… and suddenly woken up to find she's now a woman of a certain age.
When you have to sit down to put your tights on, it's obviously time to take stock. So what's the next move, Sarah?
Gay Paree has been magnifique but maybe it's time for a change?
In this funny and moving account of her globetrotting life so far, Sarah Tullamore is packing her bags, waving au revoir and singing brand new songs all about it.
Clear away the clutter…
A new show that fuses fab innovative music with an original story ! Situational comedy, heart-to-hearts with the audience, all with a narrative arc and song as an integral part of the storytelling to create a new type of show : a one-woman musical.
London – Paris – Roam ! premiered at La Comédie Nation Theatre, Paris in November 2015. In 2016, after cabaret excerpts at The Toulouse Lautrec Brasserie and The Bedroom Bar in London, Sarah performed a full version at The Rosemary Branch and Jermyn Street Theatres in London’s West End. The show ran at the Paris Fringe Festival in May to critical and public acclaim, continuing to the Edinburgh Fringe where it ran for all of August with theSpaceUK. These performances in Cape Town are part of the 2017 tour that is taking the show to France, South Africa and England.
" There is something layered and special at the heart of this production”.
- TV Bomb, 4 stars ****
"… hilarious, occasionally moving, this show left me wanting to sit down with Sarah and seek her advice on life…"
- Remotegoat, 4 stars  ****
"The script is tight, the Franglish spot on, and the softer moments touching. A charming performance !"
- Box Dust, 4 stars ****
Sarah Tullamore has travelled a lot for her work ! In France, she has appeared in Sweeney Todd, Sister Act, La Vie Parisienne, John of Arc, Alice in Wonderland and Pocahontas. She has starred in two Broadway compilation tours of Japan and also written and performed a one-woman musical, “Estelle Bright”. Originally written in French and performed over 200 times, Estelle was then adapted into English to be performed in UK regional theatres. Recently in the UK, Sarah performed in Singin’ in the Rain at Kilworth House as Dora Bailey/Miss Phoebe Dinsmore; played the part of Julie in the new musical Jog On! at The Soho Theatre and began her adventure with her latest one-woman musical, “London-Paris-Roam”. She is absolutely delighted to be taking the show on tour starting in the city where it all began, Paris, in December 2016 before moving on to South Africa and England in the spring of 2017.
James Burn studied music at Oxford University and worked for several years in Paris and Bermuda before returning to England to base himself in London. Credits include : Legacy Falls (New York Musical Theatre Festival; New Players Theatre in London); Joan of Arc; Nine Days - based on the life of Lady Jane Grey. He has also written extensively for pantomimes and Christmas shows, providing complete original scores for productions of Cinderella, Sleeping Beauty, The Firebird, Ali Baba, and Snow White.
Recently, his music was heard in Hawaii where two original songs were used in the score of Prince Dance Company’s touring production of Que Sueñes Con Las Angelitas. He has worked as Musical Director on numerous productions, including A Little Night Music (Earl Cameron Theatre, Bermuda), If I Were Me (Edinburgh Fringe Festival) An Evening of Johnny Mercer and An Evening of Bricusse and Wildhorn (Russell Scott Entertainment). He was Assistant MD on the French production of The Lion King (Stage Entertainment France, Théatre Mogador, Paris).
Frederic Baptiste is a theatre and film director based in Paris. He trained at The National Chaillot Theatre (Paris), As an actor he has been directed by Andrzej Seweryn and Robert Cantarella in plays by Shakespeare, Musset, Minyana, Nordmann, Fargeau at The National Chaillot Theatre, CDN Gennevilliers, The Blaye Festival, The Theatre of Rouen and The Belle de Mai Theatre. And in feature films by Jean-Marie Poiré (Les Visiteurs, Les Visiteurs 2); James Ivory (Jefferson in Paris); Alain Corneau (Le Nouveau Monde) and Michel Blanc (Grosse fatigue). As a director himself, Frederic was notably the resident director of Sam Mendes' musical "Cabaret" and Christopher Renshaw's "Zorro", both staged at the Folies Bergère. He is currently working on his first feature film "Les Amoureuses" that he hopes to film soon in England in English.
John Florencio started his musical training at the age of 5. He made his first appearance in public at 10. He finished his piano studies at the San Francisco Conservatory of Music. His years following the Conservatory were spent performing in concert halls across many cities in the U.S., Europe and Asia for artists in many genres ranging from classical, jazz, pop, rock and alternative music. Past shows include: “Sweeney Todd”, “Putting it Together: A Sondheim review”, “The Fantasticks”, “Songs for A New World”, “Edges”,” Ordinary Days” and “The Last Five Years”.

5 or maybe 10, sheer brilliance, wonderful entertainment . A very slick performance by Sarah and outstanding piano accompaniament by John. Thouroughly good evening all round with supper at Alexander Bar.

Pianist was excellent too

I enjoyed the show very much. A lively, fast witty performance.

Outstanding and please bring more shows out from the Edinburgh festival

Intelligent, witty, sassy, laugh out loud funny, cut above, quirky, great rapport, warm, naughty, superb voice and musicianship, not to be missed. We rather enjoyed ourselves!

Outstanding and please bring more shows out from the Edinburgh festival

All great - such energy! - and I specially liked the clever lyrics.

Really funny, great music, very talented artiste, really lovely evening (and the Parisienne girls I was sitting next to loved it to!)

We absolutely LOVED the show and give it a 5 out of 5. We are from Montreal and would love her to come to Montreal to a small theatre near us. It's a long way I know, but thought I would mention it! Kudos to Sarah - a lovely evening.

Was a really enjoyable event ! Thank you

Moving, inspiring and funny. Great watch for all ages

Sarah was brilliant and John the most enthusiastic accompliment. We thoroughly enjoyed the show and were both impressed and amused by Sarah's delivery and professionalism. What great entertainment and value. As a woman of a certain age I totally identified with Sarah's words!

Great performance and the songs/music are superb. Only slight reservation was the vocal range - much more secure and also better suited to the cabaret style intimacy when in a somewhat lower register. Sarah's smart personality shines through big time!

Sarah was brilliant and John the most enthusiastic accompliment. We thoroughly enjoyed the show and were both impressed and amused by Sarah's delivery and professionalism. What great entertainment and value. As a woman of a certain age I totally identified with Sarah's words!