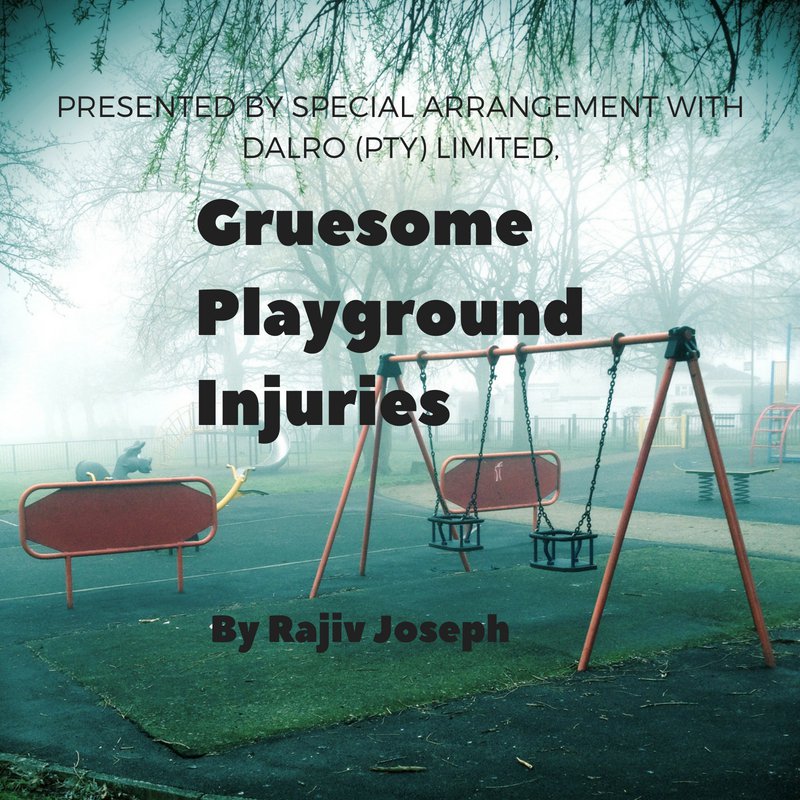 Rajiv Joseph’s Gruesome Playground Injuries makes it’s South African debut! Directed by Tara Notcutt, Gruesome Playground Injuries will run at The Alexander Bar for a limited run of 9 performances. Over the course of 30 years, the lives of Kayleen (Candice Bernstein) and Doug (Matt Newman) intersect at the most bizarre intervals, leading the two childhood friends to compare scars and the physical calamities that keep drawing them together.

"Rajiv Joseph is an artist of original talent."
—NY Times.

"This wondrous strange two-hander finds as much humour as horror in the play's bizarre events."
—Variety.

Tara is one of the most prolific directors of her generation. She is a celebrated independent director and producer, as well as Artistic Director of The Pink Couch, with a repertoire of award-winning and internationally travelling work under her belt. She has a BA in Theatre and Performance, majoring in Theatre Making, from the University of Cape Town. She has won the Fleur du Cap Theatre Award Rosalie van der Gucht Prize for New Directors (2010), and the Baxter Theatre/GIPCA/ Theatre Arts Admin Collective Emerging Theatre Director’s Bursary (2010). She was a member of the prestigious Lincoln Center Theater Directors Lab in New York City (2011), and is one of the Mail and Guardian’s Top 200 Young South Africans (2012). Since 2009, Tara has presented works at 45 festivals in 15 cities in 4 countries on 3 continents, but South Africa is her favourite. Her most lauded work includes …miskien, Mafeking Road, Undermined, The Three Little Pigs, and Three Blind Mice. She is also the South African Associate Director for the UK production of The Gruffalo, created by Tall Stories, and produced by National Arts Festival Grahamstown. Her most recent project was her 50th show that she directed, an all-female production of The Taming of the Shrew, presented at Maynardville Open-Air Theatre in February 2018.

Riveting and horrible at once. Review to follow soon in Weekend Special.

Much enjoyed! Really intriguing play, as it progresses. Enjoyed the structure. Beautiful, truthful performances from both actors. Moving, funny. Occ Matt Newman a touch strident; and Candice Bernstein sometimes seemed to be acting for camera (minor niggle). I did feel the costume changes took too long. Simplify?

Lovely show, great acting, one scene too many though imo

Tara Notcutt is a wonderful director. The play is engaging, funny and ultimately heart-wrenching. Thank you.

Really liked both script and acting

Outstanding acting by both performances

Riveting and horrible at once. Review to follow soon in Weekend Special.

Tara Notcutt is a wonderful director. The play is engaging, funny and ultimately heart-wrenching. Thank you.

I absolutely loved it! Everyone in the audience loved it. Can’t believe it was on for such a short period of time. Please bring it back!