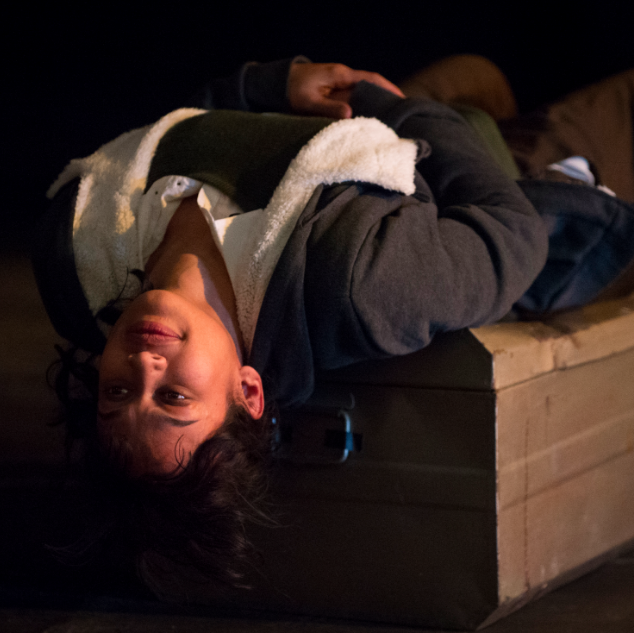 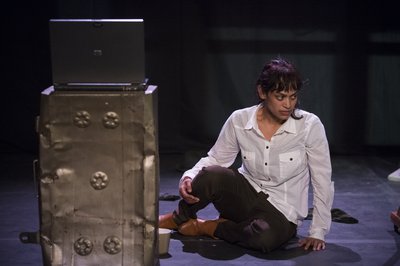 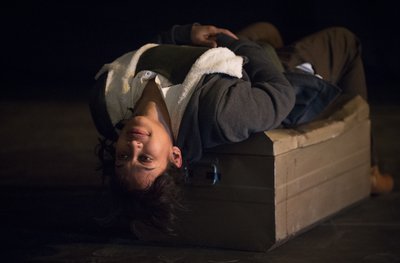 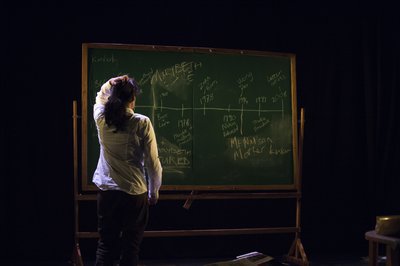 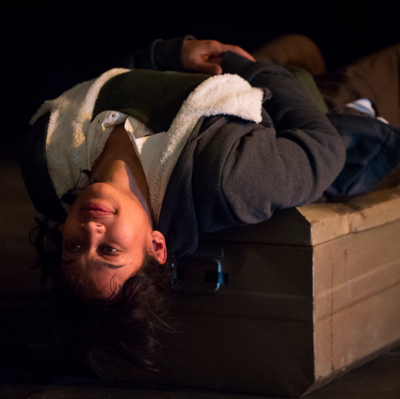 POPUpstairs is  partnership between POPArt and The Alexander Bar aimed at facilitating the touring and exchange of awesome productions between Joburg and Cape Town.

In the officious letter from the SA government, Zara learns that documents once sealed and implicating her father in an act which was committed against the anti-apartheid movement decades earlier, will soon be released to the public. The letter becomes the start of a journey into Zara’s past.

The narrative, in split chapter form, shifts between past and present – from New Jersey where Zara finds herself alone and displaced, to South Africa of the past and present. Her task is great and she grapples with constructing a history for herself and her family from between fragmented recollections and family lore.

Based on CA Davids’ 2014 novel ‘The Blacks of Cape Town’, Gold Standard Bank Ovation Award-winning writer/director Penny Youngleson has written an adaptation for stage which intricately balances the poetry and pain of discovery, of unpacking history and the drama of family politics. It will see accomplished actress Patel tackling her first one-hander, under the directorial hand of Bowers, and with musical composition and accompaniment by Daniel Geddes. Choosing, as always, to highlight stories which are not part of the mainstream cannon, Bowers considers: “At this important moment in our country’s history, how do we as South Africans - with our multitude of cultures and lived experiences - look at our past to understand our present and future.”

JADE BOWERS is a Capetonian living in Joburg, and is the 2016 Standard Bank Young Artist for Theatre. She currently works for UJ Arts & Culture and runs her own production company: Jade Bowers Design & Management. Jade graduated from the University of Cape Town with a Bachelor of Social Sciences in Drama and Sociology, and from the University of the Witwatersrand with an Honours degree focusing on directing and design for the stage.

She has been recognised by The Presidency as one of SouthAfrica’s Young Achievers; was named one of AfriPOP’s Top Five Female Theatre Makers in South Africa, and the 2014 Arts and Culture Trust ImpACT Award winner for Theatre. She has received Naledi nominations for Best Sound Design and Best Cutting Edge Production; and a Standard Bank Ovation Award for her production of Neil Coppen’s Tin Bucket Drum. She was awarded a PitchPerfect grant at the 2015 ACT | UJ Arts & Culture Conference, to support the development of an online database for playwrights and theatre-makers.

Jade has worked as a production manager, stage manager, festival director (for WALE 4.0), theatrical rights administrator, director and designer. For more information find Jade Bowers Design and Management on Facebook, follow @jadeherself on Twitter and Instagram, or check out her website jadebowers.com.

She has won several awards with Philip Rademeyer and their company, Rust Co-Operative, and in her own capacity, including: the Best International Production at the Dublin Festival, Runner Up for Best International production at Amsterdam Fringe, panel selection at Afrovibes Festival in the Netherlands, two Standard Bank Ovation awards, 3 Silver Standard Bank Ovation awards – and a Fleur du Cap award. Rademeyer and Youngleson were also nominated for a Best New South African Script Fleur du Cap in 2016.

Her latest work, Sillage (a two-hander about whiteness and womanhood in South Africa), won a Gold Ovation Award at NAF 2016. It was only the fifth theatre production to be acknowledged with this honour since the inception of the Ovation Awards at the National Arts Festival; and she is the second woman to achieve this. Her particular interest is South Africa-specific stories and has written 7 scripts in the last 4 years (Expectant, Nat, Full Stops on Your Face, Siembamba, Sillage, A Man and a Dog, An(T)oniem) – all original works, all about and for and in praise of people from this country. She is currently a Bertha Fellow at the UCT Graduate School of Business, pursuing an MPhil in Social Innovation. Her specificity is in financial inclusion and sustainable practices of mentorship amongst at-risk girls and womxn in the public schooling system in the Western Cape. She runs an after-school programme working with vulnerable learners in Grassy Park and Lavender Hill called Drama Queens and is a guest facilitator at the Makukhanye Arts Centre in Khayelitsha. She was also named one of the Mail and Guardian Top 200 Young People of 2016.

Ameera Patel recently received recognition as one of the Mail & Guardian\'s Top 200 Young South Africans. She is a storyteller at heart, jumping between the stage and the page with ease. Along with SCORCHED, she is also performing in WHISTLE STOP (Silver Standard Bank Ovation Award Award 2014 and PANSA New Writer\'s Award 2014) and RAT RACE, a family show for 4-6 year olds. Her debut novel OUTSIDE THE LINES published by Modjaji Books is currently on shelves. She is appears regularly on South African television, and will soon be appearing in a new sitcom SOAP ON A ROPE.

Geddes is an actor, singer, dancer, physical theatre performer, musician and composer, based in Johannesburg, South Africa. He completed his Honours degree in Dramatic Arts at Wits University in 2014, majoring in Writing Studies, Musical Theatre and Physical Theatre.

He is currently the co-owner and creative director of a theatre production collective called Liquid Fusion. The company has won several awards, including a Standard Bank Ovation Award for its latest production, Burn choreographed by Bailey Snyman. At the beginning of 2016, the company completed a residency at the Freezer Theatre in Iceland, where the production debute. It has since gone on to tour in Norway, Greece, and France.

In his personal capacity, Daniel has appeared in several theatre productions, working with celebrated South African theatre-makers Greg Homann (Naked Knitting and Other Contradictory Acts), Sylvaine Strike (Devil\'s Wood), and Jade Bowers (Clora) to name a few. He has also written plays that have appeared at the National Arts Festival and in Cape Town.

As a musician and composer, he has composed and performed the music for several theatre productions and dance works, including Burn, and most recently Black (Dir. Jade Bowers). In 2015 he was employed as Associate Musical Director at the University of Johannesburg Arts Centre. He currently works by session as a vocal coach alongside Cathrine Hopkins at Vocal Coach SA. He composed the music for the wildlife web series, the Bundu Basher, which released in February 2017.

i am always excited when a new playwright emerges on the local scene . i considered the production to be polished and enjoyed the intimacy of the venue. it was asif one was being contained within a very private space, having to endure the exposure of the painful secrets of the protagonist, remote from her immediate family and from close family members who would have answers but are now deceased. The tension was expressed and captured very well by the performer, who did well in portraying the range of characters. Was not convinced by the portrayal of Ndlovu though. M

It was so so wonderful. Ameera is great.

Extremely well written with an actress who did a brilliant job portraying so many characters.

Everything about the evening was lovely. From the staff to the show. highly recommended (:) kind Regards Florence

Jade's production of Black was excellent. Acting was superb. A 1st class performance. Well done to all.

Sharper direction would make this a 5-star ... strong script

A powerful story powerfully told (although occasionally felt power could have been reined in) - I was amazed by how the recorded music slotted in so precisely with the performance (esp when i learned it is usually performed live!). The piece reflects how complex our history is, and how often it is simplistically portrayed. Congrats to all involved. Small note: CVs need to be updated. TV series SOAP ON A ROPE is not in the future; it is thankfully done and dusted.

It was a beauteful act very authtentic. I was quite impressed and i can really recommend it

Veeeery good actress! And very interesting if you want to learn about history! And also very good to reflect, that there are not goods and bads in life. We are persons, with both poles in the heart :) Also good to reflect that actually everyone of us can behave corrupt, when the opportunity is given. Very interesting! And also enjoyable Thanks!

It was a beautiful play. I was quite impressed i can realy recommend it

Boring heteronormative script while an opportunity to grapple interestingly with race and betrayal was missed.

Thought provoking. So much information is difficult to transmit in a limited time period and by ONE PERSON. Ameera Patel did an excellent job. I would like to see her in future productions

A fantastic production professionally relayed by the awesome Ameera Patel under the directorship of the prolific Jade Bowers.

Very powerful show which had a deep affect on me personally.

Great performance that brought me to tears. I do love Alexander Bar.

The Alexander Theatre was the perfect venue for this intimate theatrical experience. Ms Patel was simply perfect - she made us fully believe that she was Ms Black, and has lived through all the situations explored in this drama - i.e. she was totally believable. Hats off to all concerned. One of our very best Alexander evenings. More like this, please...

An outstanding performance by a brilliant actor. Ameera Patel is a superstar.

It was so so wonderful. Ameera is great.