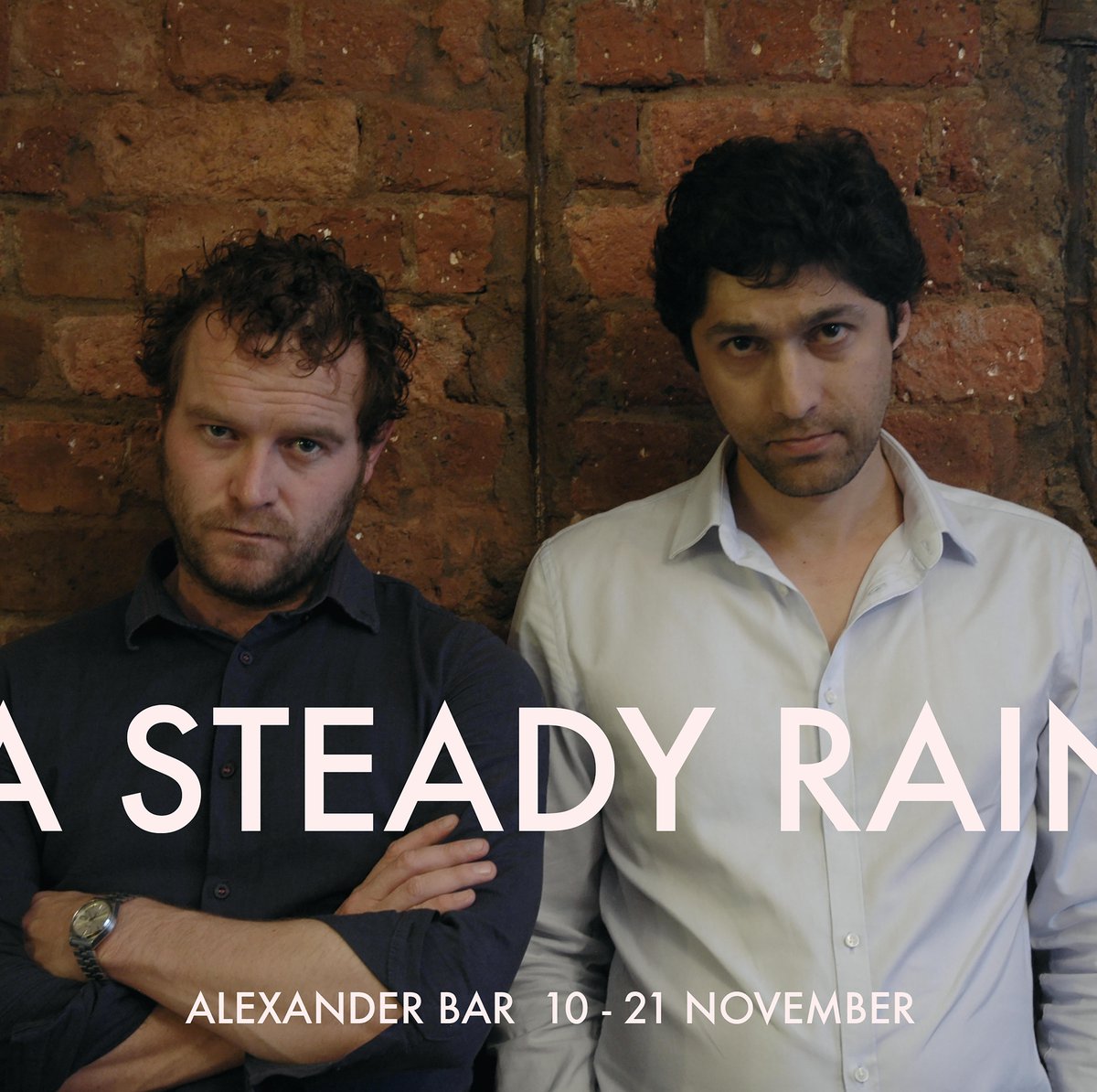 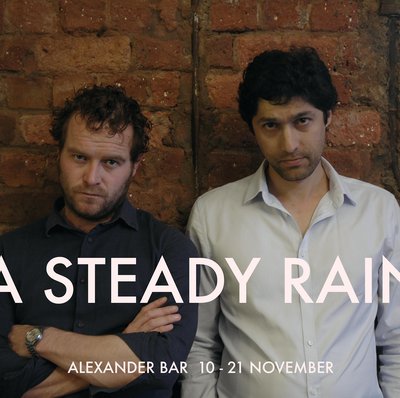 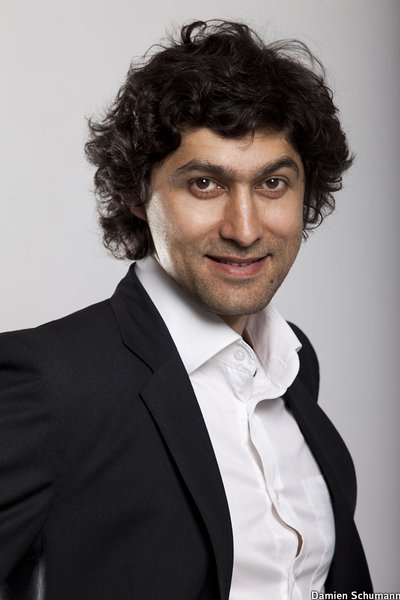 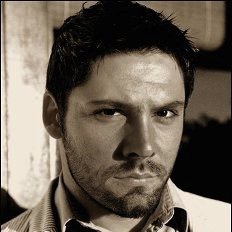 Palmer and Pauling perform in this gritty, rich and entirely gripping noir tale of two Chicago police officers whose inner need to serve and protect both consumes them and rips them apart

Keith Huff's award-winning hit Broadway play “A Steady Rain” takes the audience on a gripping, relentless journey. Using razor-sharp story-telling, writer Keith Huff weaves the perspectives of two Chicago police officers, Joey and Denny, into a harrowing story. Long time partners and best friends, Joey and Denny have serious problems. Joey struggles with alcohol while he secretly obsesses over Denny's wife. Denny is resentful, aggressive and racist cheater. During the course of the compelling and devastating narrative, the audience is kept white-knuckled right until the moment the lights go down.
Biographies:

Nicholas Pauling's theatre credits include: The Frontiersmen, Blue/Orange, The Pervert Laura, Waiting for the Barbarians, Hamlet, Romeo and Juliet, The Tempest, Zoo Story, Cowboy Mouth, Who\'s Afraid Of Virginia Woolf, Champ, Death of a Colonialist, King Lear, Mich Ado about Nothing, Comedy of Errors, Amadeus ( Fleur du Cap, Best Actor). His film and TV roles include: Black Butterflies, Challenger Final Flight, Death Race 2, Unfriend, Black Sails, Dominion, Bluestone 42, Apocolypse Slough, Leonardo, Book of Negroes
Brent Palmer, a London trained actor, comedian and writer is the man behind the 2015 SAFTA winning comedic short film Picture Perfect Heist. He is currently developing a feature film of the same name with Benchfilms. He also wrote and acted in the Fleur Du Cap nominated play called Bench.   Over the last fifteen years Brent has worked professionally in theatre, television and film with his most recent television credits being Those who Can’t (SABC) and Jamillah and Aladdin (CBBC). Brent has also used his talents to direct shows for comedians such as Nik Rabinowitz, Siv Ngesi and Gaetan Scmidt.   As a result of his passion for authentic and full expression, he runs workshops on speaking and presenting with confidence across the country to a large spectrum of corporate clients.
Adrian Collins’ extensive theatre work includes Hamlet, directed by Janet Suzman at the Baxter and Swan theatre in Stratford upon Avon, A Midsummer Night’s Dream and The Birthday Party, for which he received a Fleur de Cap nomination. Adrian is a member of The Mechanicals theatre collective and most recently played the role of Edmund in King Lear.

Review of A Steady Rain by Mariana Malan

First rate performances and characterisation by both actors, accents, interest and tension well-maintained. Adrian's direction could only have been inspiring. The script caused the storyline to dip a bit in the second half, with much negativity. But the play is up to the minute, deals with a subject topical in the US and in SA: Racism, clashes between Black and White, police and citizens. Congratulations to all concerned. A good night at the theatre.

A bit too dialogue heavy for me, but still a good play. Top notch performances. Strong direction.

Very good. Brilliant script and fantastic acting by Brent and Nick. Well done to them both. Very impressed.

For a small cast of two actors to hold my attention for 90 minutes after my long busy week was quite frankly amazing. Such a griping tale with many twists and turns I had no idea how it would end and in a way didn't want it to. The actors complimented each othe perfectly and the lightening and stage direction spot on.

Will be coming back for more

Remarkable performance from both actors in a story that visually unfolds as a film in front of you.

Very good story and acting. Would really enjoy a murder mystery next

It was a fabulous show - superb acting and stage direction that honestly made me feel i had just watched a big budget, major motion picture. What a lovely welcoming space and a great experience overall. I will be back. Dont ever close down!

5/5 It was one of the most powerful plays that I have ever seen! It leaves the audience breathless ... Sensitively and carefully directed, masterfully acted. My guest, an 85 year old lady from the UK said: "WOW! I am speechless".

Absolutely brilliant ... We were totally engrossed for an hour and a half (how do those guys keep going???) Such a waste that it was only a 2 nighter! Awesome acting and character development.

Outstanding performances from both actors, 90 minutes of dialogue - astonishing. I don't know how much stage direction the script includes but the movements and interaction were perfectly attuned. The only very minor issue I had was with the lighting - some of the changes seemed arbitrary and downright odd. Such a shame that it was a two nighter - what was that about? That production really must have a longer run to a bigger audience. Thanks for introducing me to two fine professionals.

I really appreciated, admired and enjoyed the incredibly strong acting. I was absorbed by the story and by their skill as storytellers (except for when I was periodically distracted by two dooses in the audience on their cellphones.)

It was fantastic, the dialogue amazing!

A wonderful and full evening. A gripping performance by both Nicholas and Brent. So lovely to see a longer piece at Alexander Bar.

IT was a super performance and the actors were great. A good story well presented.I left the place with tears in my eyes. Thank you!

Excellent! A very well crafted script, brilliantly executed by Nick Paulig & Brent Palmer, under the watchful guidance of Adrian Collins. Subtle lighting design enhanced this "on the edge of your seat" performance. Bravo to all involved!

Great performances from both the actors. The characters were incredibly detailed and engaging. Thoroughly enjoyed it

Both actrs were intense, perfectly maintained accents and almost word perfect (Nicolas slipped twice). It was like a combination of all the buddy cop movies/TV series I have watched rolled into one but with a punch to the guts. And the snacks were great too, especially since I arrived to late to order food. Will come again.

The performance was superb! It was great to see Brent Palmer again! Lovely atmosphere, as it was my first time at the Alexander Bar! Duncan, Noordhoek

Excellent performance and direction of a powerful, relevant and scarily familiar script.

An outstanding production! A script that is smart, intelligently crafted and gritty; skillful, sensitive direction and two award-worthy performances - the play gripped the audience from the opening moments to its poignant denouement. Truly compelling.

Harrowing. Riveting performances and story which kicks you in the guts.

A Steady Rain was an intriguing and extremely well acted piece, touching on some emotions we rarely allow ourselves to feel. We are faced with some of the most difficult issues of human interaction, while challenged to keep an open mind and most of all, to observe without judgement. The intimate setting forces the audience to look at what is unfolding in front of their eyes, though at times hard to digest. The quality of acting was excellent - Bravo to both of them.